Home» An Inspirational Thought for Today » The Music Truck

So it came about whenever the evil spirit from God came to Saul, David would take the harp and play it with his hand; and Saul would be refreshed and be well, and the evil spirit would depart from him. 1 Samuel 16:23

Sometimes the simple playing of music can change the mood.  Whether jazz to unwind, a little hip hop to clean the house, or some Bach with candlelight–all music affects us from the inside out.

King Saul was in need of music. He was afflicted by a distressing spirit and needed music to calm his soul.  David, the master harpist, was appointed to play his music and calm the agitated heart of the king.  When he practiced his art, a soothing balm was applied to the king and the distressing spirit departed.  Everyone in the presence of the king was refreshed and the king himself was at peace.

Music has impacted me over the years too.  I grew up in a musical family.  My Dad led the music in local churches, and we sang whenever we traveled in the family car.  Something else is lodged in my memories about music from my childhood–the memory of the music truck.

There was this really nice man that traveled through our neighborhood every day during the summer.  He drove down each street in his white van playing music for the boys and girls–at least that is what my mom told us.   What a great guy!  We would run to the front porch and wave as he drove by.  We could always count on him to smile and wave back.  He made us feel so special every time he drove past our house–until that ONE day. 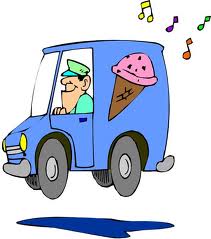 It was the day I was playing at my friend’s house, the next street over.  I heard the music truck coming, and I prepared to wave, but as I looked around, all my friends had vanished.  What happened next completely surprised me.  My friends quickly re-appeared with coins in their hands and ran out into the street commanding the music man to STOP!  My first reaction was to be embarrassed at their actions, but within moments, I was enlightened.  Once the music truck stopped, the man met all us kids at the side window.  His van was filled with ice cream and candy!  I was completely shocked as he sold treats to my friends!

I ran home as fast as I could.  I burst through the door with the news.  “Mom!” I gasped, “The man in the music truck has ice cream and he is selling it to my friends!  Hurry, we need to go buy some!”   Obviously, it was NOT news to her.  I found out my mom had been less than forthright with me and my sister.  The thrill of the music truck has never been the same since that day.

Music can soothe the human soul–God designed it that way. Sometimes life seems to be playing your favorite tune and sometimes–not so much.  Although things in life are not always what they initially seem, we all have the choice to get mad at what we cannot change, or just enjoy the moment, knowing the song will be over soon.

May your day be filled with music and thankfulness as you reflect on the goodness of God.